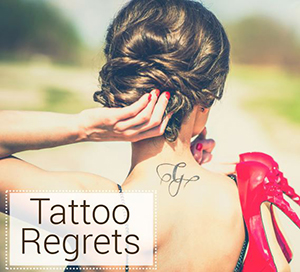 In recent years, tattoos have become a larger part of mainstream society. According to the Statistic Brain Research Institute (http://www.statisticbrain.com/tattoo-statistics/), over 45,000,000 people in the United States have at least one tattoo, and those consumers spent an estimated $1,650,500,000 on their tattoos. Getting ink is also quite affordable, with the average small tattoo costing only $45 while larger pieces can cost $150 per hour. The same report shows another trend in tattoos — 17% of those with tattoos regret their decision and 11% plan on having the ink removed.

Tattoo Removal Is On The Rise

According to the American Society for Aesthetic Plastic Surgery, approximately 46,000 people have their tattoos removed with laser treatments, and women account for 72% of these consumers. So why do so many people change their minds when it comes to their tattoos? The Harris Poll reports that the top reason is being “too young” when the decision was made, revealing the general perception of tattoos being a somewhat youth-related choice. Typically these men and women chose artwork that reflected their personalities at the time, but they have since developed a stronger sense of self or a different lifestyle. This may be linked to the motivation behind the tattoo, such as the 33% who got tattoos to feel more attractive and the 19% who said their ink is “spiritual” in meaning. Amongst those who regret their tattoos are also those who admit to falling victim to one of the most widely-recognized mistakes in tattoos — permanently marking your body with the name of a current significant other. Relationships may not last, but tattoos are forever. Other reasons for tattoo removal are poor designs, workmanship and a lack of meaning in the tattoo design.

So now that you have decided that the thrill of your tattoo has fallen by the wayside, what can you do? If you are unhappy with the design (or the name), you can look for a qualified tattoo artist who specializes in cover-ups. Not every tattoo artist has the skill and vision needed to effectively cover your ink, so shop around. Ask other artists who they recommend. But this is only an option if you are generally happy with having a tattoo, but just do not like the current design.

If you just want your tattoo to disappear, The Kole Plastic Surgery Center offers tattoo removal with the PicoSure® laser system. Laser tattoo removal works by breaking up the ink pigment in your skin, and no other laser does the job better than the PicoSure® laser. The system destroys tattoo ink faster than other systems, including resistant colors such as greens and blues. We have even successfully removed tattoos that could not be eliminated with other laser systems. The ultra-short pulses of laser energy from the PicoSure® system generate a photomechanical impact that literally smashes the ink into very small particles that your body absorbs naturally. Several treatments are needed for most tattoos, and the number of treatments depends on your skin type, as well as the age, color, and quality of the tattoo. For a complimentary PicoSure® laser quote, you can come in for a private complimentary consultation or visit our website and download your photos.